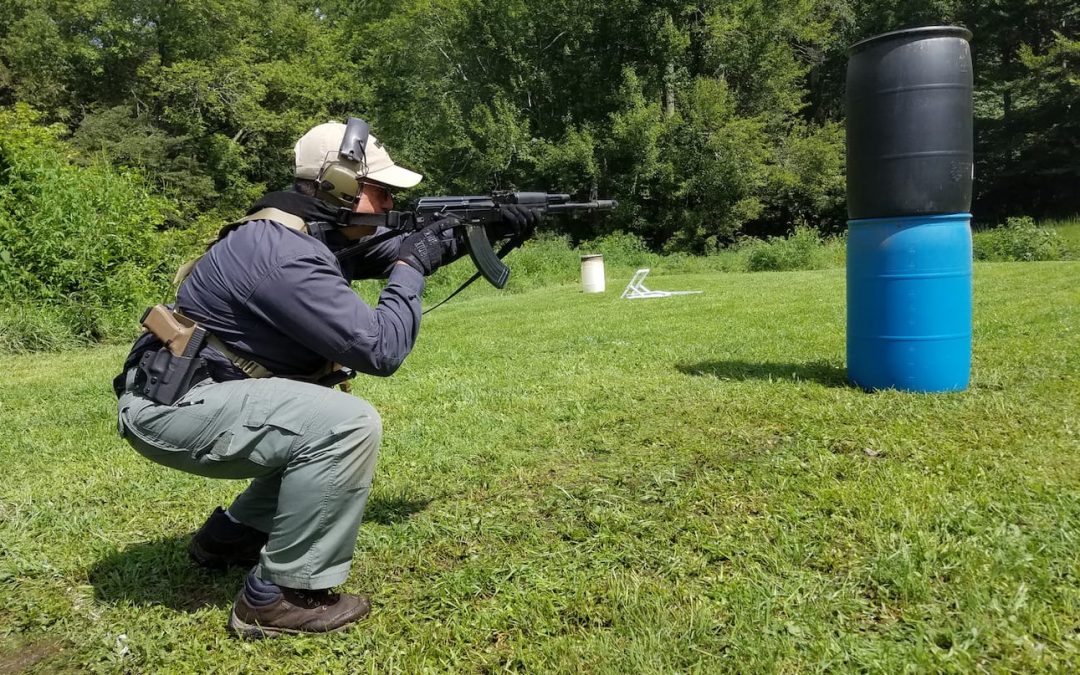 [This review is a real treat to post. It comes to us from a fine American with a very inspirational life story. With his permission, I’ve shared his story below – the review is posted after that. I highly recommend that you read this whole post, because this one really hits home just why it is that I do what I do, and it should be motivational to you. I want to teach good people – hardworking, decent patriots – to defend themselves. It was my privilege to be able to teach such an excellent American. – JAB]

I hope this finds you well. My name is Toufic Saad and I had signed up for the Rifle I class on August 21st. I go by my middle name: Anthony, for shortening: Tony. I am 52 years old and reside a few miles outside Paintsville. I am a college educator and I teach Mathematics. I am a full professor with tenure and have been employed at the college for almost 28 years. I am a native of Beirut, Lebanon. I am a Lebanese Christian. Lebanon was ravaged by a civil war from 1975-1990. We Christians were persecuted for our faith by Radical Muslims then and still are. After finishing high school in August 1981, at the age of 17, my parents sent me away to the USA to make a life for myself and live the American Dream. I did not speak English at the time, so I had immersed myself in the English language because I so wanted to embrace the American culture since my lifelong dream was to become an American…Fast forward to 1988, I finished my Master’s degree in Computer Science at the University of Kentucky and was hired at the college in January of 1989. I fell in love with the hills of Eastern Kentucky and the mountain folks and it became home. The proudest day of my life was when I became an American in October 1997, and when my daughter was born in March 1999. I so look forward to the class and to learn and grow!!

[This little addition I learned after the class was over:]

On another note, I tell my students: “Life is tough, wear a cup”  :). Having survived birth (was born prematurely at 2.5 lbs of weight and stayed in an incubator for 40 days), survived a bloody and brutal civil war, a car crash in 1977, colon cancer in 2010, and thyroid cancer in 2014, I am very blessed to be on this side of the dirt. By God’s Grace and Mercy I am alive and well and I am appreciative of every day I am given to live. So training means much much more to me than a recreational outing. It’s a reaffirmation that I am given the gift of life to be on this earth that one more day  to enjoy life to the fullest, to be amongst friends, and to train with a phenomenal group of like-minded  fine individuals.

My name is Toufic Saad and I live in Eastern Kentucky. I grew up in a hostile part of the world where I was persecuted for my Christian faith. I migrated to the U.S. at the age of seventeen to live the American Dream and to live in peace in this great nation of ours. Having grown up in the midst of a civil war as a teenager, I had witnessed more death, destruction, and violence in one day than most people would in a lifetime. I had realized early in life how fragile and precious human life can be and for that reason, I had immersed myself as an adult in the study of martial arts, defensive tactics, and firearm training, in order to protect myself and others and to prevail once in harm’s way.  In a nutshell, I consider myself a civilian sheepdog.

I enrolled in Ben’s Rifle I class on August 21, 2016 with a group of friends from a neighboring county. Prior to the class date, Ben contacted us to lay out the expectations for the training day and to offer assistance pertaining to directions, gear list, parking, inclement weather, and other details. A few days before the class date, I looked up Ben’s YouTube channel, reviewed his posts, and read his blogs on ATA’s website. I had not met him yet and I was already so impressed with his level of professionalism, experience, patriotism, and knowledge. At that point I was awaiting the class date with great anticipation. On class day, Ben greeted our group at the entrance of ATA in London and arranged transportation of the attendees from the parking area to the range site. The class began with an introduction of the students, small and casual talk, and then followed by the classroom/theory part of the course. Not long after that, we geared up and the training began. Throughout the day, Ben was so thorough, methodical, took great interest in each student’s growth, and offered constructive criticism but never demeaned or chastised anyone. The drills were intense and challenging at times. Ben was patient, offered suggestions for improvement, and shared great insight on ways to enhance our skillset.

At the end of the training day, we had a debriefing session and it seems like the eight-hour day had gone by like a flash. I thought about my experience at ATA during the entire trip back home and I promised Ben that I will come back for more training. To my surprise, Ben followed up with a courtesy e-mail couple of days later. He impressed upon us the guidelines and tips that he had shared during class.

Now that’s an educator at heart!

Toufic (Tony) Saad -Lebanese by birth. American by the Grace of God!!