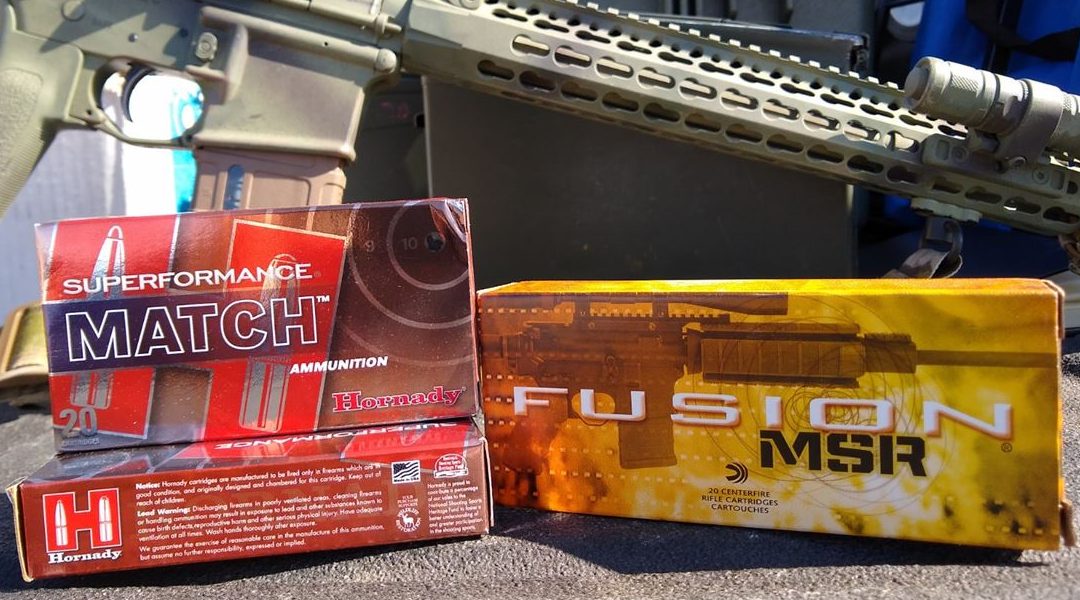 Last week we took a look at the range performance of some defensive pistol ammo. This week, we’re going to examine a couple of different rifle loads that we received from Widener’s Reloading & Shooting Supply: Federal Fusion MSR .223 and Hornady Superformance 75gr 5.56. As was the case with our pistol ammunition range testing, this ammunition was provided free of charge by Widener’s for the benefit of you, our readers.

It’s no secret to readers of the blog that I’m a big fan of .223/5.56 rifles for home defense. Rifles offer several key advantages over pistols, but the primary thing we are going to focus on today is power, or (to be more precise) terminal effectiveness. As we discussed last week, the most important factor in determining handgun bullet effectiveness is penetration, followed by expansion. As a pistol bullet or other low-velocity projectile travels through its target, it destroys tissue and leaves what is known as a permanent cavity, which is just a fancy way of saying a hole. A piece of lead traveling relatively quickly through tissue will also create a temporary cavity, which is a stretching of tissue that then snaps back to its original position. Human tissues are generally too elastic to suffer permanent damage as a result of the temporary cavity produced by low velocity projectiles, such as pistol rounds. But when high velocity projectiles (such as rifle rounds) strike tissue, the extreme amount of stretch produced by that temporary cavity can overcome the natural elasticity of body tissues and cause additional damage.

Because of the high velocity of rifle projectiles, there are multiple different ways that rifle rounds can wound: controlled expansion and fragmentation. Controlled expansion works very similarly to the way a hollow point pistol projectile works: when it hits the tissue, the nose peels back and the bullet “mushrooms” to increase its diameter. On the other hand, when a bullet fragments, it enters its target nose-forward, yaws to about 90°, then breaks apart into multiple fragments. The fragments then shred the stretched tissue that results from the temporary cavity and creates a very large permanent wound cavity.

Based on that description alone, one might conclude that a fragmenting round is superior to a controlled expansion round. While it is true that a fragmenting projectile might produce a more severe wound than a round that expands, fragmenting rounds tend to… well… fragment when they encounter intermediate barriers such as auto glass, car doors, interior walls, and the like. Controlled expansion bullets, on the other hand, tend to penetrate these barriers and still pack enough punch to get good penetration on the target beyond. 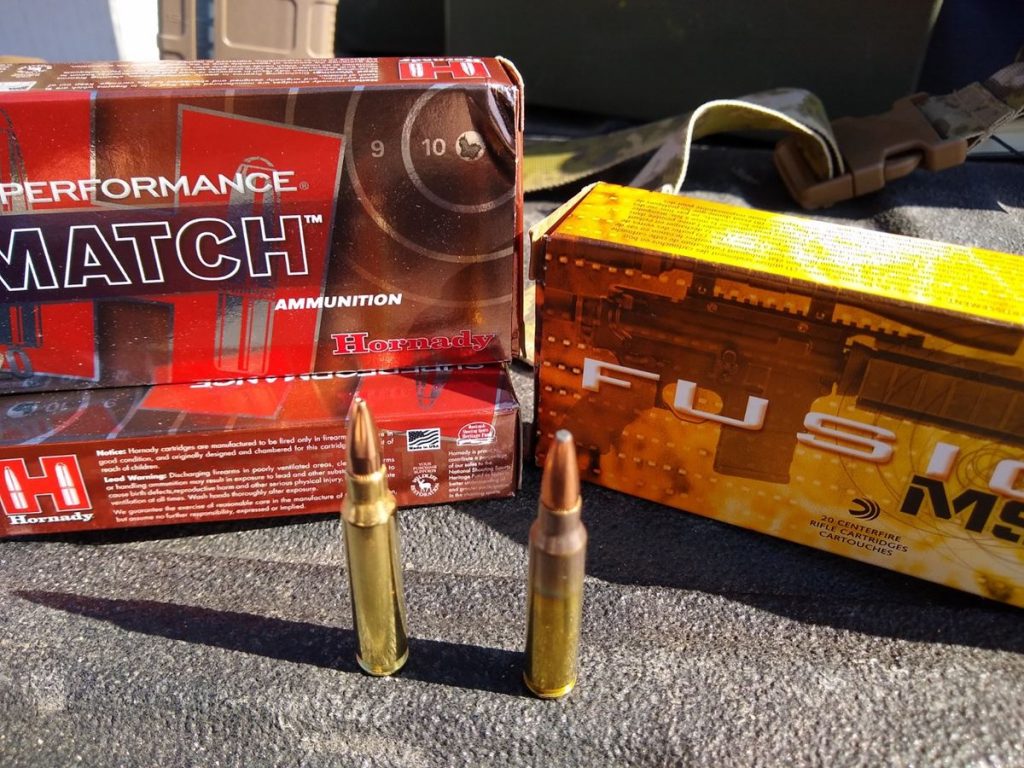 Federal Fusion MSR 62gr .223 is a controlled expansion load. The projectile is a bonded JSP (jacketed soft point) round that features an exposed lead nose. Hornady Superformance 75gr 5.56 is a fragmenting round that features Hornady’s T2 OTM (open tip match) projectile. You can see the difference in the (somewhat blurry) picture above. Both of these projectiles are known to have good performance in gel testing, with the Hornady T2 creating large wound cavities in bare gelatin, and the 62gr Fusion projectile performing very well after first defeating a wide variety of barriers.

The Testing and Results

Testing was conducted at a range near the southwest border. Conditions were great for shooting with little to no wind, a 90° temperature, and 15% humidity. Three 10-round strings of each round were fired from the prone (no bench rest or vise) at 100 yards, and the best groups from each load were used. One 10-round string of each load was also chronographed with the chrono placed 10′ from the muzzle. For this test, I was shooting my 14.5″ chrome-lined BCM rifle wearing a Griffin Armament Recce 5 suppressor and a Burris MTAC 1-4x scope. 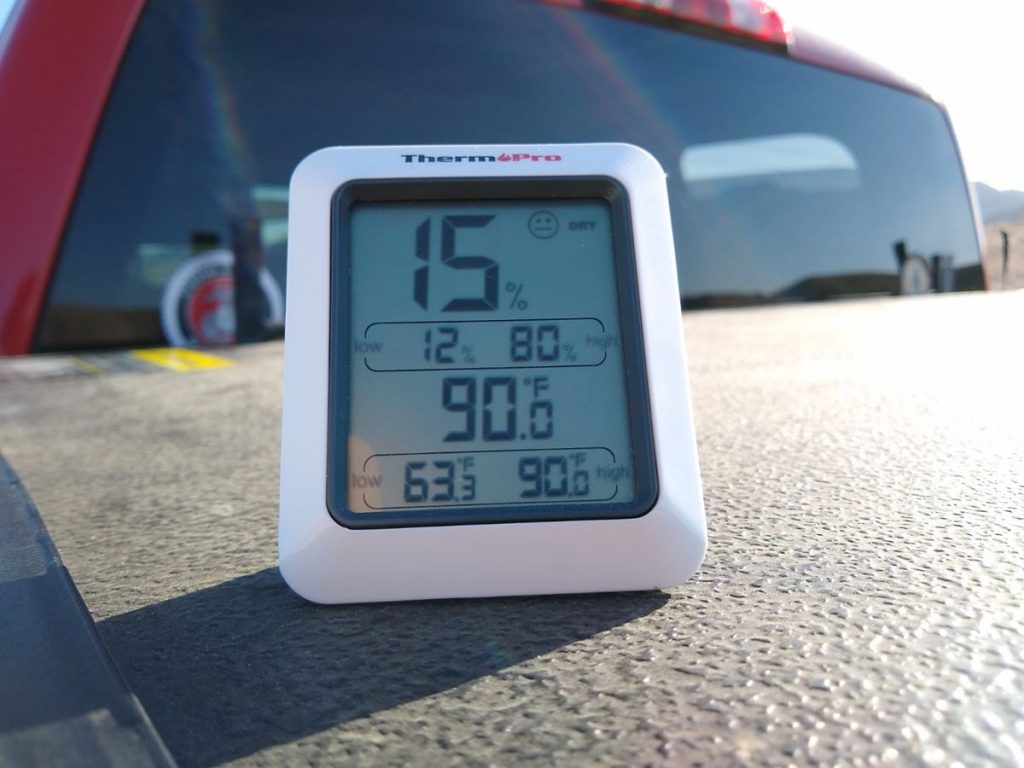 Here are the results for each string. Unlike the pistol ammunition test, I didn’t conduct any kind of a short-range test to attempt to compare recoil, because there just wasn’t a noticeable difference while shooting these groups. .223 and 5.56 are not particularly hard-kicking rounds to begin with, and the particular setup that I was using is also very soft-shooting.

As you can see from the chart above, the extreme spread on the two loads were virtually identical. But if we look at the mean radius, we can see a difference. The purpose of the Superformance load (and its 75gr OTM bullet) is to be used primarily for long-range precision shooting, and it shows. As you can see below, most of the shots were within about 1″ of each other. Keep in mind that this group was fired from a chrome-lined barrel, not a stainless or melonite match-grade barrel. That is excellent accuracy, all things considered. 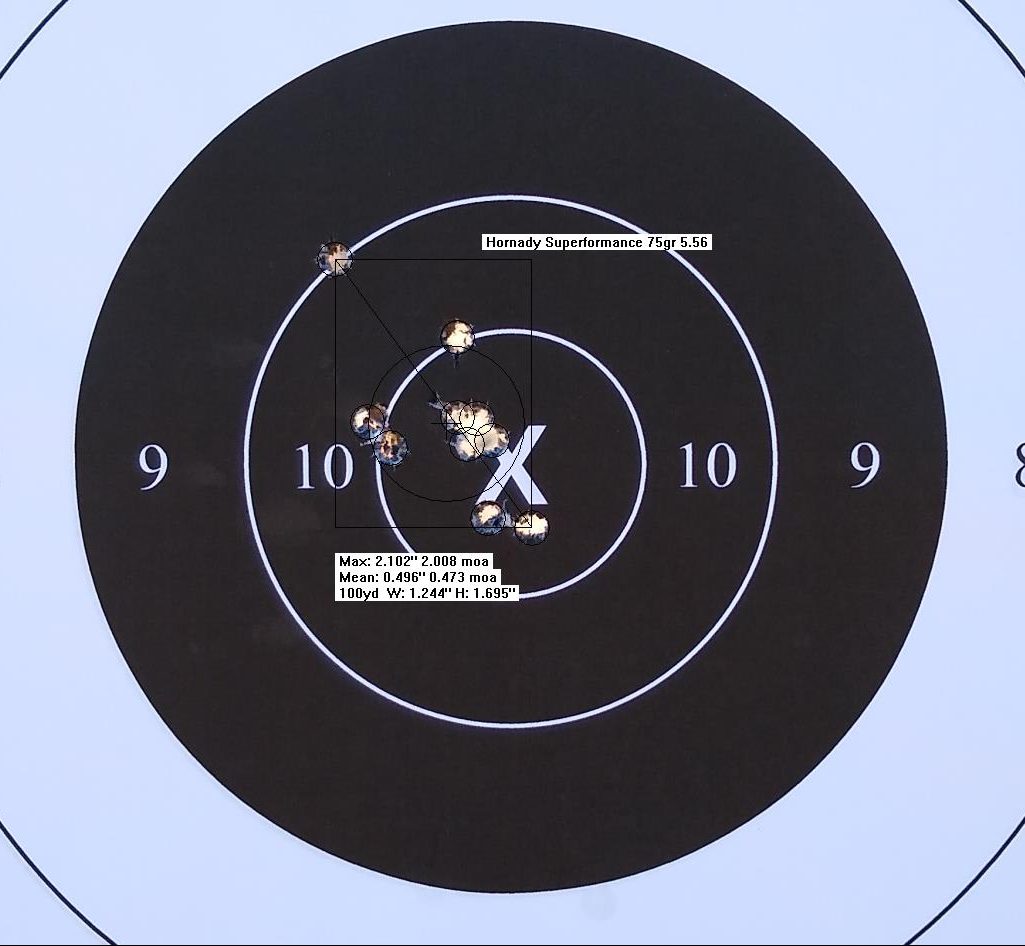 Of course, the important thing to remember about this load is that it is a fragmenting round. While its open-air accuracy is outstanding, and it has the potential to cause serious tissue damage, its strong suit is not punching through intermediate barriers like furniture, interior doors, etc. I also really like that the Superformance is loaded to 5.56 pressures. That means that the round is squeezing every bit of velocity it can for a 75gr bullet.

Again, the extreme spread between this round and the Superformance is essentially the same. But this round is measurably less accurate when we look at the mean radius. Is it that significant from a practical standpoint? Not at all. Especially not when we consider that the most likely use of a rifle for defensive purposes inside the United States is going to be well within 100 yards. However if you live in a rural area and have a need for pest control (coyotes, etc) at longer range, then it might matter. But the bottom line is this: a 2″ 10-shot group from a chrome-lined barrel at 100y is still darn good. 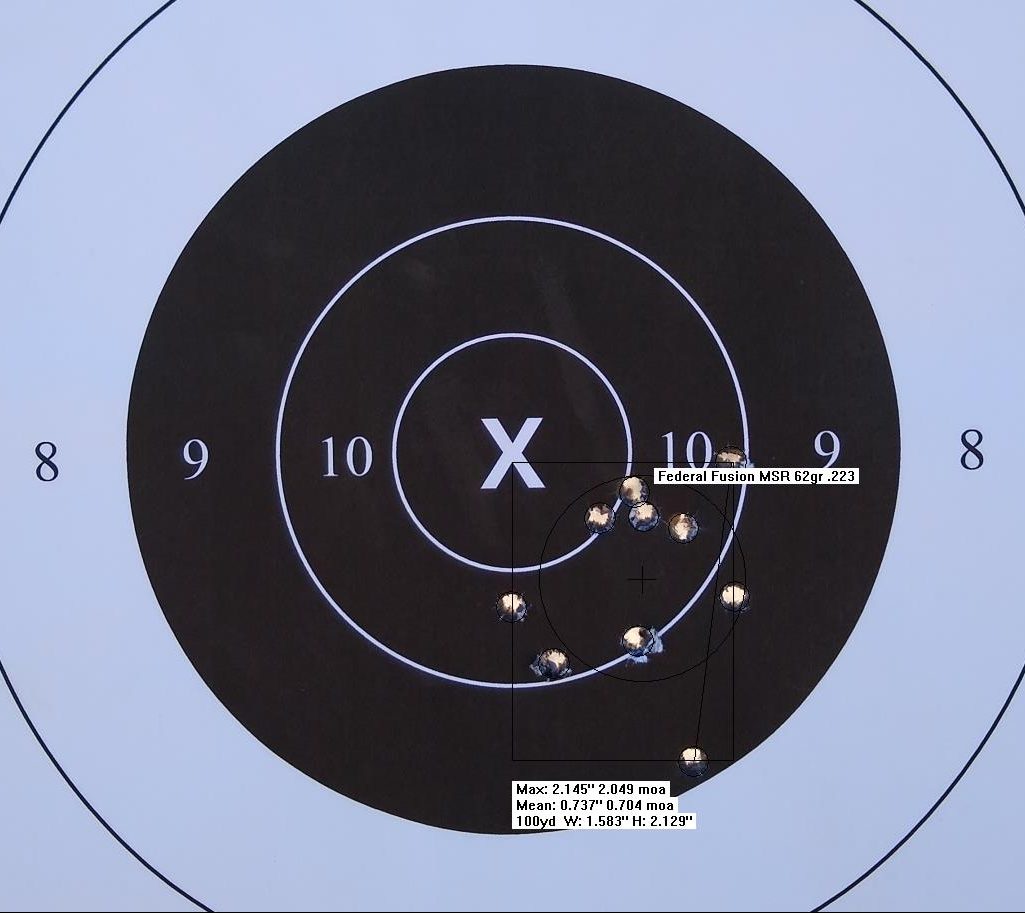 The Fusion MSR round works off of controlled expansion. This means that it will do better through intermediate barriers such as walls, doors, furniture, and vehicles. If you anticipate the need to shoot in the vicinity of these sorts of barriers, then that’s an important consideration. One thing that I don’t like about these rounds is that they are loaded to .223 pressures instead of 5.56. That means that Federal is leaving velocity on the table with this load.

I have a preference for controlled expansion rounds when we consider using rifles in a defensive role. Houses are full of things for bad people to hide behind, and I want to be sure that any shots I may need to take are effective regardless of how cluttered the target area is. For that reason, if I had to pick between these two loads, then I would load my home defense rifle magazines with Federal Fusion MSR. With that said, both rounds are fantastic options for a defensive purposes. I think that whichever one you choose will likely serve you very well. I also think that you would be well served by looking at Widener’s for these rounds or any others that you might need. Having been a Widener’s customer myself, I can tell you first-hand that they have a great selection at a fair price with fast shipping. Get over there, and get something to load in your home defense rifle mags today!