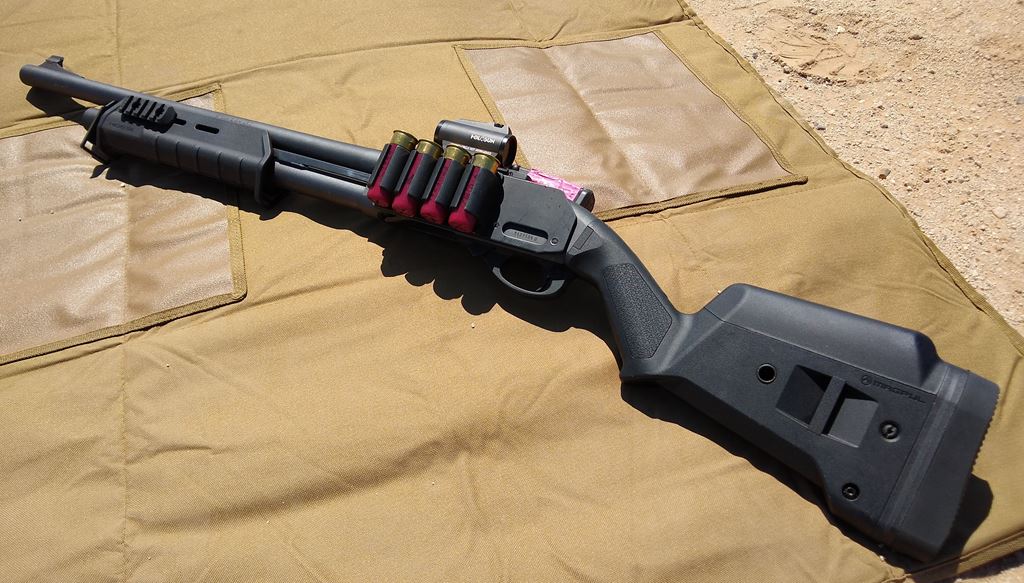 This week we’re back to conclude our defensive shotgun ammo testing. As always, our friends at Widener’s Reloading & Shooting Supply provided us with some high quality shotgun slugs to test for your benefit.

In the 12 Gauge Buckshot Range Report that I did earlier this month, I described the purpose of why one might shoot slugs out of a defensive scattergun:

The other type of load that I’m testing today – and which you will commonly find used in police/military/defensive situations – is the rifled slug. A 12ga slug is one large chunk of lead about 3/4″ in diameter that weighs about an ounce. It’s called a rifled slug because there are spiral grooves etched onto the side of the projectile to help it stabilize in flight after being launched from the smooth bore of a shotgun. A good way to think about a rifled slug is like an improved version of a Revolutionary War-era musket ball. Rifled slugs generally exhibit deep penetration with very little deformation. That means that they possess perfectly adequate terminal effectiveness for the anti-personnel role, but they aren’t anything special on that front. The real strengths of a slug are twofold: it extends the effective/safe range of the shotgun well beyond what you see with buckshot, and it does an excellent job of penetrating through intermediate barriers to still smack the target that’s waiting on the other side.

… With slugs, you can easily hit man-sized targets out to 100+ yards, but the deep penetration is a huge liability inside a structure – especially multi-unit housing structures like apartment complexes. For that reason, buckshot will be the go-to load for most home-defense situations. The short distances at which in-home engagements occur play to buckshot’s strengths. The spread won’t be that dramatic at typical in-home ranges, and the high level of terminal effectiveness will help to end fights more quickly.

So what does this look like in practice? I’ve encountered people who hold the misguided (in my opinion) belief that for a defensive/fighting shotgun, an Armed Citizen should load slugs exclusively. If you couldn’t tell from the two paragraphs above, I think that’s a big mistake. Shotgun ammo is all about using the right tool for the job. In general, I think of  a shotgun as a close range weapon; if I intend to be doing most of my shooting beyond about 25 yards, I would pick something purpose-built for that job… like a rifle. In my view, all using slugs actually does is turn your shotgun into a sub-par rifle.

But that’s okay. Because sometimes you intend to solve a short-range problem and end up needing to take a longer shot. So that’s why we might elect to carry both slugs and buckshot on the same gun. A pretty standard practice (and the one that I personally prefer) is to keep your shotgun loaded with buckshot and then have 1 to 3 slugs in your side saddle. That gives you a couple slugs on hand for that low probability shot.

So which slugs should you actually load up? Well that is the subject of today’s post!

This is somewhat of an oversimplification, but I generally consider slugs to be slugs. It’s true that there is quite a variety of them out there, but when it comes to rifled slugs of the Brenneke or Foster types, they are pretty much 1 oz of lead flying at a pretty standard velocity. There are some difference as we will discuss below with our test loads, but most slugs will do what you want them to do once they hit the target.

For testing, I shot 5-round groups of each load from a sandbag rest at 50y using a red-dot-sighted Remington 870. I compared the various groups and selected one group of each that was most “average” or the best representation of the lot to show you guys here today. 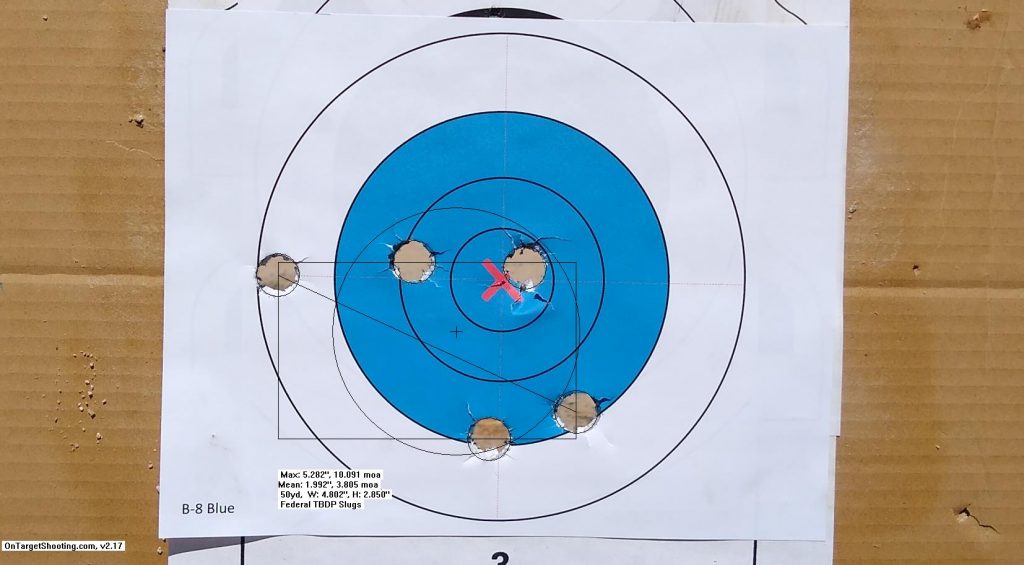 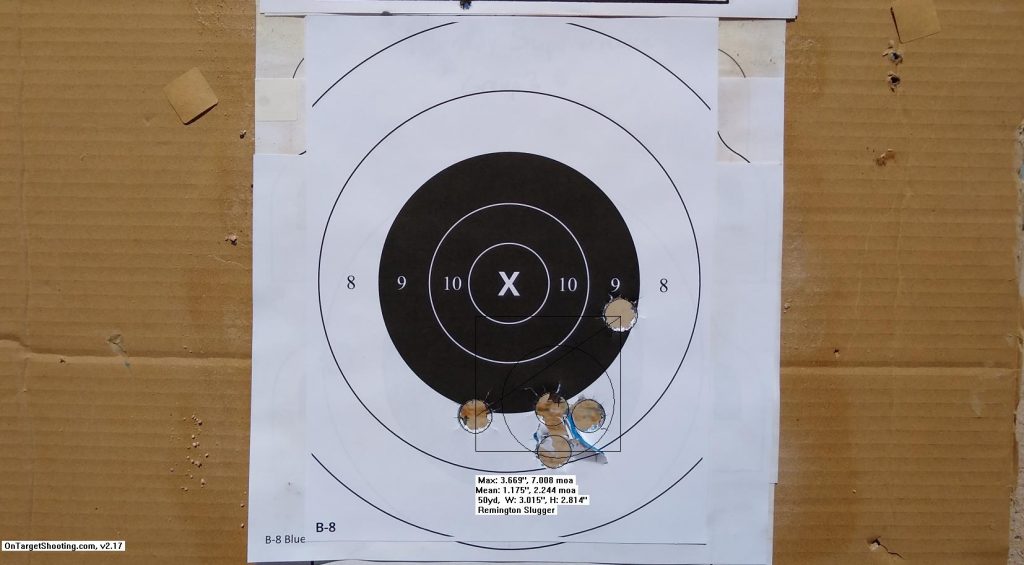 As you can see, the Remington load had about a 30% smaller extreme spread vs. the Federal load. But more importantly than that, it was overall more consistent within that extreme spread, having a nearly 45% smaller mean radius!

These are the results in my gun. I had heard great things about the Truball Deep Penetrator’s accuracy in the past, to include tales of 2″ extreme spread at 50y. Well I’m not going to call BS on that, but I am going say that I didn’t get any such accuracy as that.

I know that Doctor Gary Roberts is also a fan of the Truball’s performance through barriers such as auto glass, though I tend to think that most of the time when you send a 1 oz chunk of lead flying at something in excess of 1100 FPS, that you’ll get some pretty reliable penetration. I suppose I could be wrong, but still…

Ultimately my opinion on these two slugs (and slugs more generally) is that they are a stopgap measure anyway – a load designed to turn your shotgun into a temporary rifle, should the need arise. Neither 7 MOA or 10 MOA accuracy is anything to write home about, and that’s okay. It’s a shotgun, and even with slugs, you’re generally not going to be looking to shoot past 100y anyway. Hitting a 10″ group or a 7″ group at 100y is pretty good if that’s the maximum range you’re going to shoot anyway.

So there you have it. Short and sweet. I think that either of these loads would be a fine addition to your defensive shotgun loadout, so head over to Widener’s and pick up plenty of whichever load you choose. Just make sure to zero your scattergun (or learn your holds with bead sights), train smart, and stay dangerous!