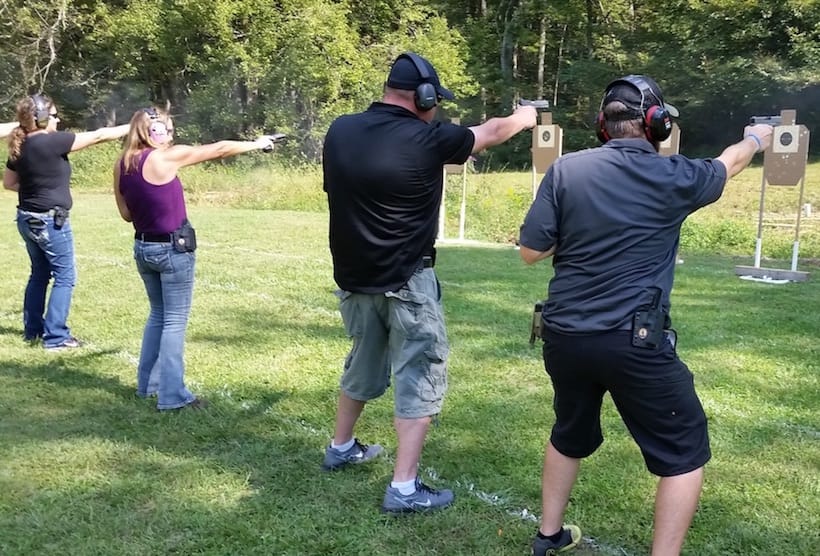 I had the pleasure of attending Appalachian Tactical Academy’s Pistol I Class on September 24th, 2016 with Ben Adams as my instructor. I have had my KY CCDW License since I was 21, and have actively carried for 19 years. I decided to take this class to help improve my current level of skill so I can eventually look into competitive shooting, but also learn how to better defend myself and family. After taking ATA’s Pistol I class, I realized I have a lot to continue to train on. This was the first formal training class I have attended and I would highly recommend for anyone of any skill level to attend, especially for those seeking their CCDW license.

The day started out in a classroom, which don’t expect to be given the standard CCDW training videos in this class. This was a positive from the start. The information delivered was information that you were going to be using later on that day at the range. There are no Legislators reading the Law off a paper then staring blankly into a camera and giving you the same information that they just read. ATA prepared all the information presented and it was very educational. Ben was very knowledgeable about the subjects that he covered in the classroom. If you attend the class in the future, the workspace that Ben introduces you to will become your new best friend.

Once the classroom session was completed, the range part of the class was the most fun of the day. The class was blessed to have a hot but not humid day. The class started with marksmanship and finished with basic moving while firing drills before the final certification shooting test. The multiple drills that the class completed and Ben’s attention to his students was a great benefit for all that attended. He was able to provide all those attending with attention and corrections in areas that he saw that most of us did not know that we were making. I think I had the most fun with the Malfunction Drills. This was also the first time I put my 1911 through firing so many rounds. Everyone enjoyed the time at the range. The class finished with legal information and the written test.

Ben is one of the best marksman I have ever seen using a pistol that wasn’t on a YouTube video. With the training and techniques that he presented, his students will become better marksmen over all. This was even visible during the class. Ben was also very engaging to all his students. Much like any learning situation, you are given the tools you need, but it is your responsibility to apply those tools and to master their use.

Again, I would highly recommend that anyone take Appalachian Tactical Academy’s Pistol I Class. The amount of knowledge that Ben passes along in the span of the class session is well worth the money that the class cost, which in itself is a great value. To receive this type of training in Southeast Kentucky was truly amazing. For many in this area, this is an untapped resource for those that want to be armed citizens and want to defend themselves and their family or to enhance the skills that they already have. I am already planning to take the Pistol II and Rifle I class in the future.