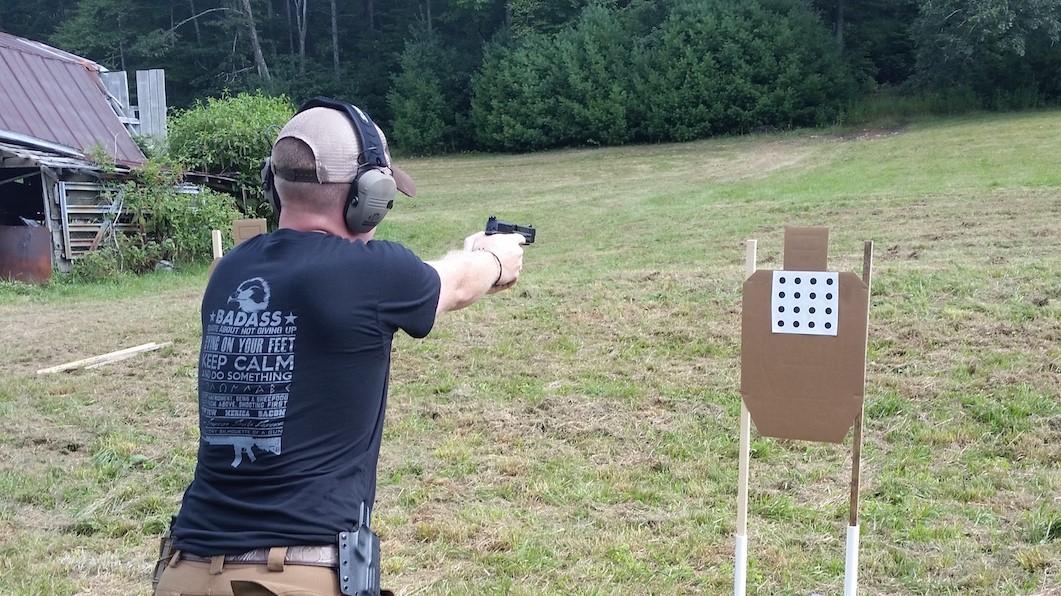 Hey, my name is Brandon. I’ve served with Josh in the Marine Corps. I graduated from Parris Island on Oct 3, 2014 and became a rifleman on Dec 23, 2015. I was raised around guns. Growing up, my family taught me about safely handling and shooting rifles and pistols, and they also took me hunting. The Marine Corps reinforced my skills when it came to rifles, but overall I didn’t have a whole lot of experience with pistols. When I would shoot a pistol, I would normally go with my dad and shoot his Glock. To be honest, both of us were terrible. He has never taken a pistol class and I hadn’t either. There were no consistent groups and the rounds didn’t go where we wanted them to.

Josh told us about his ATA Pistol I class and our opportunity to take it with him and I jumped on it immediately. I wanted to have some kind of useful knowledge with pistols other than just how to hold one so it was an obvious yes from me. I had recently purchased my first pistol: a Smith & Wesson M&P 9mm Pro Series C.O.R.E., so I was excited to use my own pistol and learn how it shoots specifically (it did great!)

The class started off on the basics. We first had a PowerPoint presentation on sight picture and trigger control. Then Josh took us on the range and talked us through our first trigger pulls and after the first few shots I realized I was getting better, my muscle memory was developing and my shots were landing in the black more often. He adjusted my grip as well which made a noticeable difference and felt much more comfortable. We did a lot of drills, all of which were beneficial. We learned how to draw safely and quickly from our holsters and put accurate rounds down in a reasonable time, we practiced one handed shooting and reloading and we also had moving and shooting drills.

The class made me a much better marksman with pistols and makes me feel like if the day ever came where I had to protect myself, I could do so effectively and have the knowledge on whether or not I would be legally wrong in the eyes of a court. I plan on taking ATA Pistol II to further my training and readiness and I recommend the course to all of my friends whom I know carry or want to carry.