The ammunition you carry in your self-defense weapon matters. I think that this is a topic that a lot of people are pretty uneducated on, and it really is an important thing to possess at least a working knowledge of. ATA recently had the good fortune of receiving a shipment of several different self defense/police duty loads from Widener’s Reloading and Shooting Supply, so I decided to take the opportunity do so some range testing of three different 9mm pistol loads to help you make a more informed decision on what ammo to use for self defense.

Before I go any farther, however, I want to make some things clear: Widener’s provided this ammo to ATA free of charge. They reached out to Dillon and asked if he would be interested in testing any of the items in their catalogue for the benefit of you, the students of ATA. Dillon jumped on the opportunity and reached out to me to actually conduct the testing. With that said, I also want to tell you that I’ve personally shopped at Widener’s in the past. They have always had a good selection, competitive pricing, fast shipping, and top-notch service. If you’re in the market for ammunition or reloading supplies, I highly suggest you check them out!

First things first: following the 1986 FBI Miami shootout, the FBI got serious about researching what makes a bullet effective for stopping fights. What they discovered would fill a book all on its own, but the short version follows.

When it comes to handgun wounding factors, the following things are true:

With modern technology and construction techniques, we are finding that smaller projectiles can now achieve terminal effects similar to that of larger calibers. As a result, the FBI decided back in 2015 to change their primary duty pistol caliber to 9mm. Many other federal, state, and local LE agencies in the US have followed suit.

We decided to conduct some range testing of three different loads which are all recommended as meeting the FBI’s testing protocol, which involves shooting blocks of calibrated ballistics gelatin through a variety of intermediate barriers. 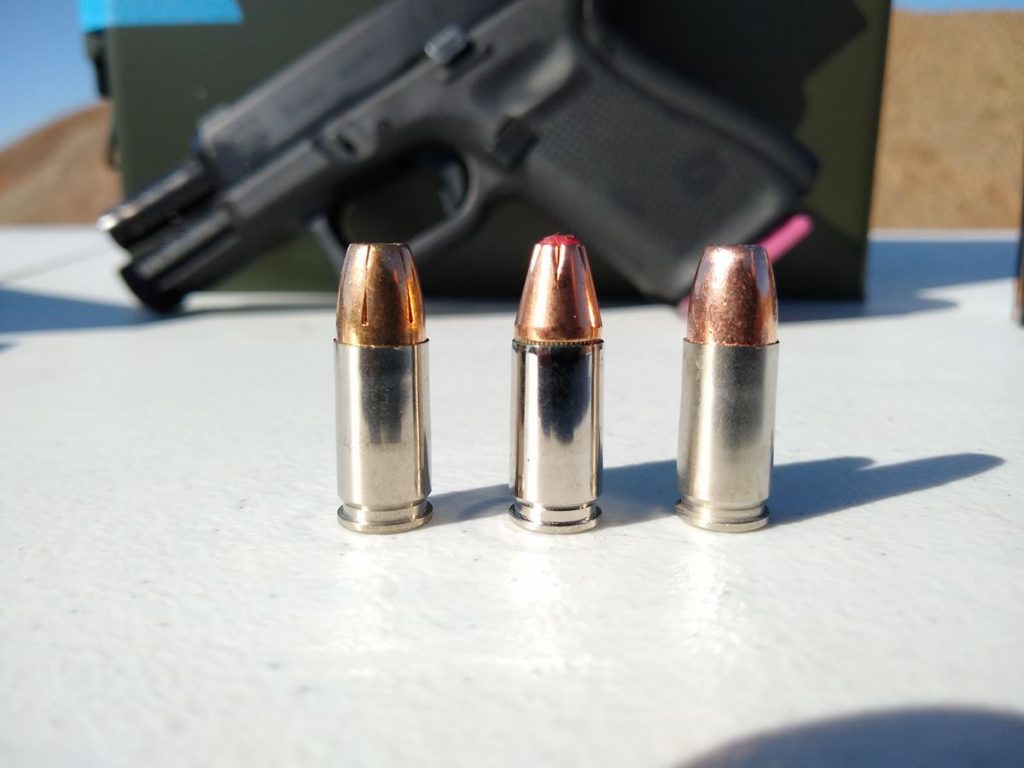 Pictured above are our three test loads from left to right:

The testing that I conducted focused on range performance. Many others who are set up much better than me to conduct gel testing have already done it. What I opted to do was to test fire these rounds from my EDC Glock 19 and give you a range report.

With 50 rounds of each load, I decided to conduct the following testing:

Testing was conducted at a range near the southwest border. Conditions were 88° F and 26% humidity.

Disclaimer: I will be up front in saying that this was not the most scientific range test ever conducted. I don’t have a great benchrest setup, so my off-hand groups tended to be more accurate than my benchrest groups. I was therefore subject to all the various sources of human error, such as fatigue and just throwing the occasional bad shot. This testing was also limited to my EDC Glock 19. Performance may vary somewhat in your carry piece.

Here is the bottom line up front:

I will say right up front that this was my least favorite load in a subjective sense. The recoil felt very snappy. It was quite noticeable during my slow-fire accuracy testing. With that said, it was pushing a muzzle velocity that was more than 200 FPS faster than the next two loads. Does this translate to improved terminal performance? Not necessarily. The answer to that question is all in the gel testing. But it might be an advantage when used in a pistol caliber carbine. It could provide a slightly flatter trajectory over 100y than the other two loads that were tested.

Accuracy was good. The best 10-shot group had a 4″ extreme spread. Another 10-shot group I rattled off had an obvious flier, but the remaining 9 rounds all fit within about a 3.5″ extreme spread. There were no issues with reliability. All 50 rounds fed and fired perfectly. Regarding the FAST Test: my best run with this load was a 6.39 raw time with 2 missed head shots (4 seconds of penalties) and 1 missed body shot (1 second penalty). Is that a truly scientific measurement of recoil? Absolutely not. When pushing my speed, the results on this drill are overwhelmingly dependent on my ability as a shooter. But the extra snappiness definitely didn’t help me get back on target any faster.

This particular load was subjectively my favorite load. Despite being a +P load, it was very soft shooting. Also, it was strangely not significantly faster out of the muzzle than the standard pressure Federal HST 147gr load, averaging only 32 FPS of added velocity. This projectile shape is also pretty unique. The ogive is much steeper and more angular than most other jacketed hollow point designs. I suppose it is possible that steeper angle could help with feeding, but that is really just speculation. 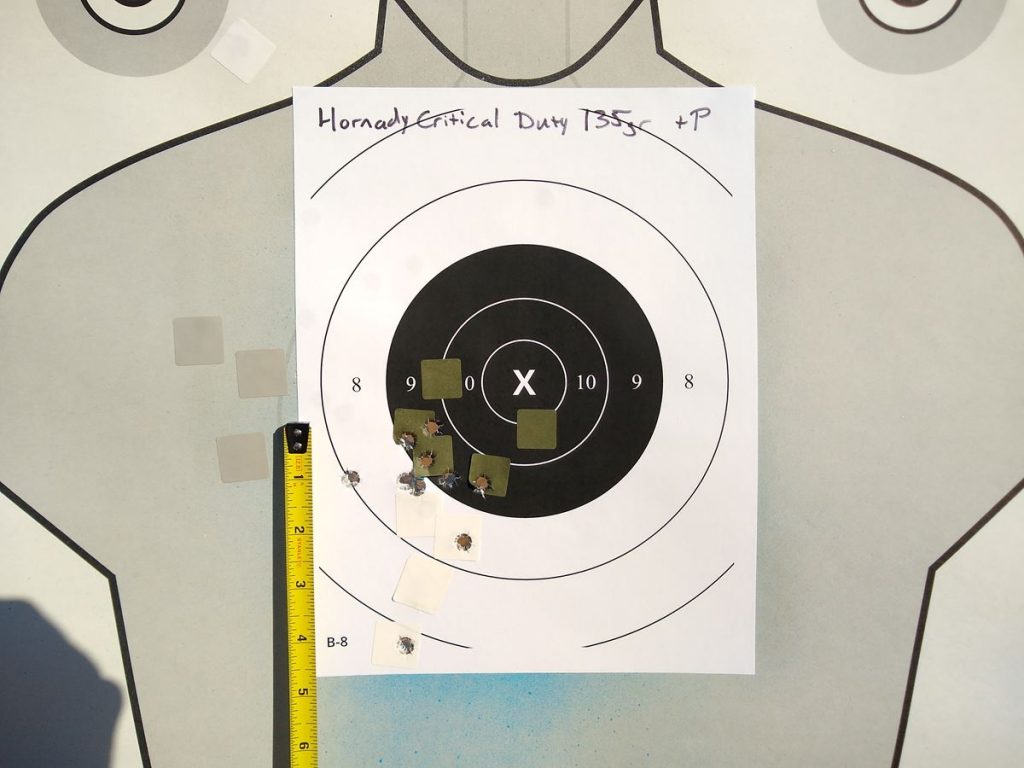 Accuracy was excellent. The best 10-shot group had a 4″ extreme spread, which could be reduced to 3.25″ without the flier. As you can see from the picture above, 7 out of 10 rounds from that group even fit into about a 2″ extreme spread. This group was fired off-hand. As with the Gold Dots, all rounds of the Hornady ammo were 100% reliable. I also got my best FAST test run at 6.74 seconds.

This is the load I was most excited about, because it generally dominates independent ballistics gelatin tests. But its range performance certainly left a lot to be desired. Recoil was pretty mild; it was not as snappy as the Gold Dots and almost as tame as the Critical Duty. Accuracy was horrible. My best group had an extreme spread of 5.5″. My best FAST time with this load was the worst of the three tested at 11.74 seconds (6.74 raw time +5 seconds of penalties). All 50 rounds functioned perfectly. 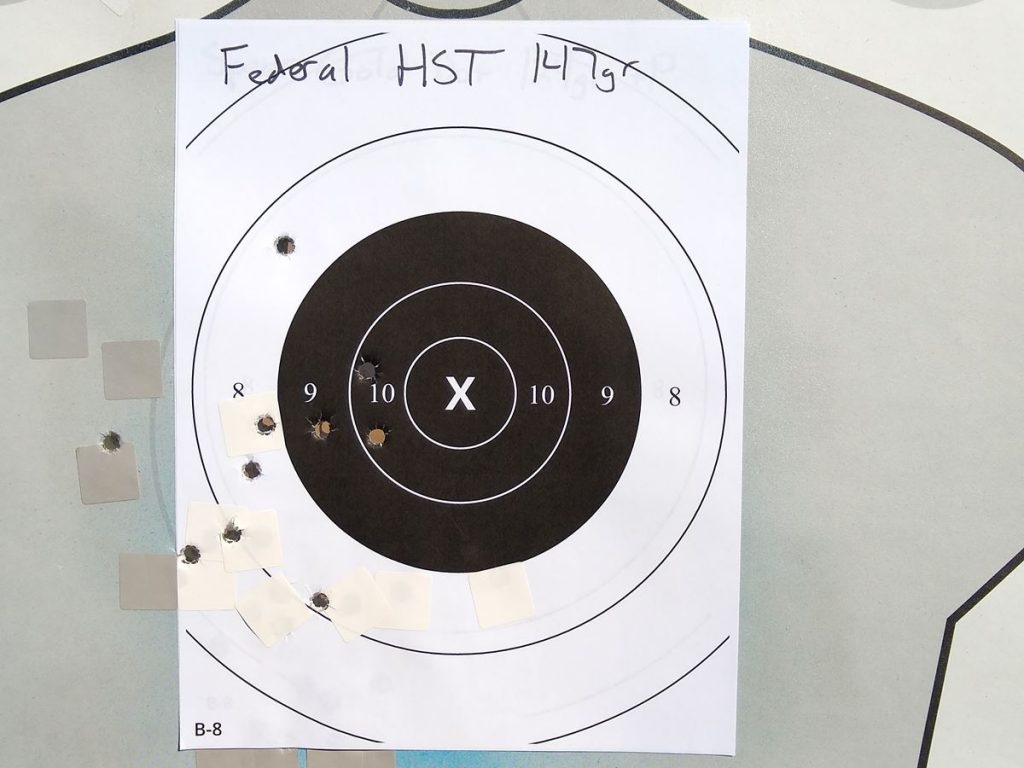 I will personally be loading my mags with the Hornady Critical Duty 135gr +P. Subjectively, it was very soft shooting, and it displayed excellent accuracy. In some independent ballistics testing, it shows worse results through certain barriers than the other two loads, but it still meets the standards for use in police duty weapons. The FBI even adopted this round as its standard issue, and that organization invented the ballistics gel testing standards. I feel like that says a lot.

That’s it for today, Citizen-Warriors. I’ll return in a week or two with some rifle ammunition testing. In the meantime, get out there and make yourself dangerous. And remember that whether you need to pick up some premium JHP’s for carry or some bulk FMJ rounds for training and practice, Widener’s has you covered.