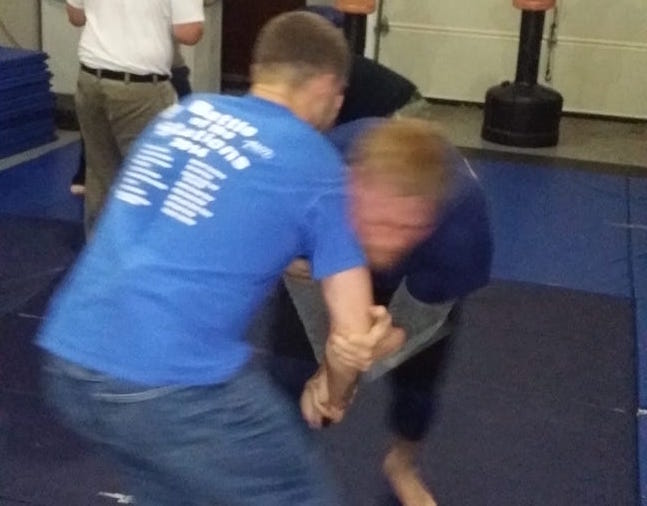 This is a review of another instructor’s class. My plan, of course, is to post others’ reviews of my classes on this blog, and I will get to that as soon as they start rolling in from the students at the last ATA Pistol I class. But despite being a teacher, I’m still a lifelong student. You can’t just rest on your laurels and stop studying this stuff if you want to be good.

So, being the good little student of violence that I am, I took the four-hour Edged Weapons Workshop from Performance Edge in Lexington, KY back in November of this year. The class was taught by the owner and head instructor of Performance Edge (PE), Aaron Little (pronounced “A-A-RON”).

My relationship with Aaron dates back winter of 2007-2008, while I was in my senior year at the University of Kentucky. In 2004, after leaving my original martial arts home, Tri-County Shao-Lin Do, led by the awesome Senior Master Eric Burke (a post about him and his school will be up at some point), I found myself looking for a new place to study the martial arts. In my freshman year, I bounced around between a few schools, never really finding anything that grabbed my interest. In my sophomore year, I got plugged into a local MMA gym, and while the ju-jitsu program there was outstanding, the rest of the training was really lackluster. That’s when I heard about Performance Edge from some guys in my Arabic class. I went over to PE and talked to Aaron within the week, and joined the gym as soon as I participated in my first trial class.

I have been blessed to train with some solid martial arts teachers over the past 16 years, and they all have their unique individual strengths. The primary component that separates Aaron from his peers is the concept of Aliveness.

Aliveness, according to Aaron, is training drills where the two (or more) participants have opposing goals that they are each actively trying to achieve. In other words, the person actually doing the drill has a genuinely resistive opponent. Instead of the whole “Here! Grab my hand… the other hand… your other hand!” thing that a lot of martial arts instructors do, Aaron has the “training dummy” partner actually try to beat the student who is practicing the drill.

The benefits of this kind of approach are obvious; bogus techniques that look flashy but don’t work in real life will be exposed for what they are under this sort of training pressure. 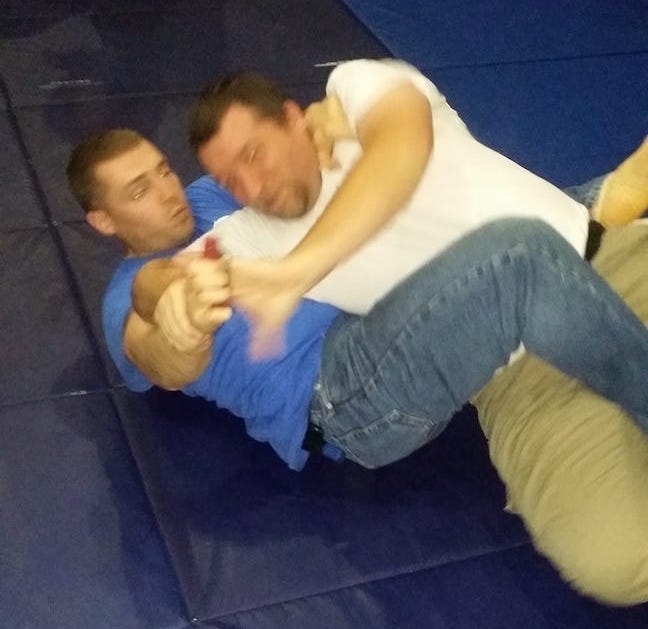 See that look of surprise? There’s no choreography here. That’s what aliveness looks like in training.

So that brings us (finally!) to the actual knife seminar. Have you had any experience with knife-based martial arts? Most of them teach things like strips, disarms, “defanging the snake” and other really cool-looking tricks with neat names. Most of them also just don’t stand up against the reality of a genuine knife attack.

One of the first things that is covered in the class is the nature of a knife attack. Let me ask you: how many times have you heard of somebody being found stabbed to death with only one knife wound? Probably never! You’re way more likely to hear about a body being found with 37 stab wounds. That’s because knife attacks are brutal, fast, and violent. A real knife attack is most likely going to involve repeated stabbing like a piston or a sewing machine. Just imagine somebody fueled by pure hate and rage coming at you with a sharp shard of metal in hand thrusting it at your chest and throat over and over again, like in the first 16 second or so of this video:

Are your fancy strips going to work against that? Is your cute little scarf that you think is some kind of neato weapon going to stop that attack? Are you going to get your gun out before the attacker can stab you half a dozen or more times, mortally wounding you? If your answer to those questions is anything other than “no”, then you’re deluding yourself.

Here is a secret about fighting, guys: fights are fights. Gunfights are fights. Knife-fights are fights. I once heard another experienced warrior say that “fighting isn’t a contact sport – it’s a collision sport”, and I think pretty well sums it up. All fights are messy and violent. Sometimes you win them, and sometimes you lose them. The reason we train is to give ourselves the best possible chance for success in that messy, violent arena.

That’s exactly what the PE Edged Weapons Workshop does: Aaron teaches how to deal with the real-world piston-style knife attack by having somebody with a foam-bladed training knife try to “kill” you with it. It becomes painfully obvious that you’re probably going to get cut and stabbed if you find yourself facing a knife-wielding attacker, but the knife defense that Aaron teaches is probably your best option for dealing with that terrible situation, nonetheless. 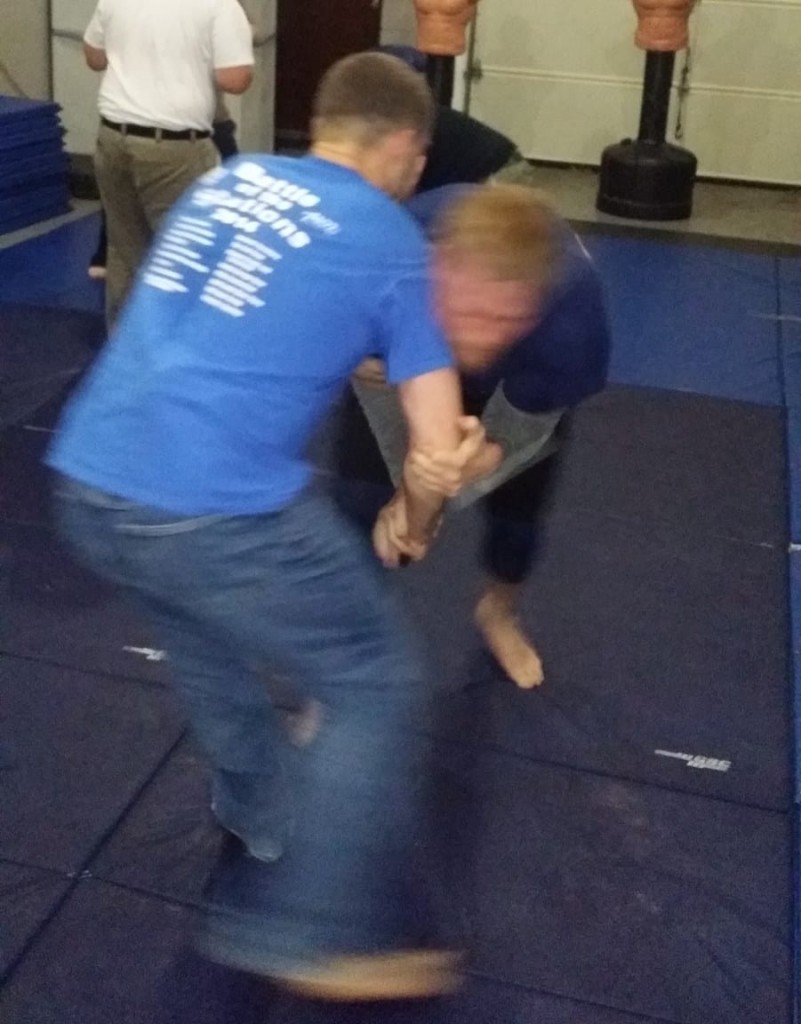 Getting to the two-on-one position if extremely important to controlling the knife.

After covering defense against a knife, the class transitions over to using a knife as an attacker. Many armed citizens carry some type of knife as a supplemental weapon, and many (un)armed citizens carry a knife as a tool. It’s entirely possible that in a defensive encounter, you could find yourself pulling a knife. Aaron teaches some of the best methods for launching an unpredictable, hard-to-defeat knife attack if you find yourself in a position where you need to do it.

In case it isn’t obvious from the pictures and description so far, the PE Edged Weapons Workshop isn’t a gentleman’s class; you will get sweaty and nasty. You will roll around on the ground with determined training partners who want you to improve so that you can save your own life. You will likely leave with a lot of little bruises all over your arms and chest (I also had a nice one under my right eye from where I was taken down head-first onto the mat).

But if you’re new to this sort of training, don’t let that dissuade you from checking it out. There was a lady in the class who works as a college professor. She related that she had a lot of apprehension and anxiety about coming to the class, but from what she tells me, the class was a great experience for her. Amongst a crowd of athletes, mixed martial artists, prison guards, and even Marines, a college professor was able to learn in a nonthreatening environment where everybody worked together for everyone else’s benefit. 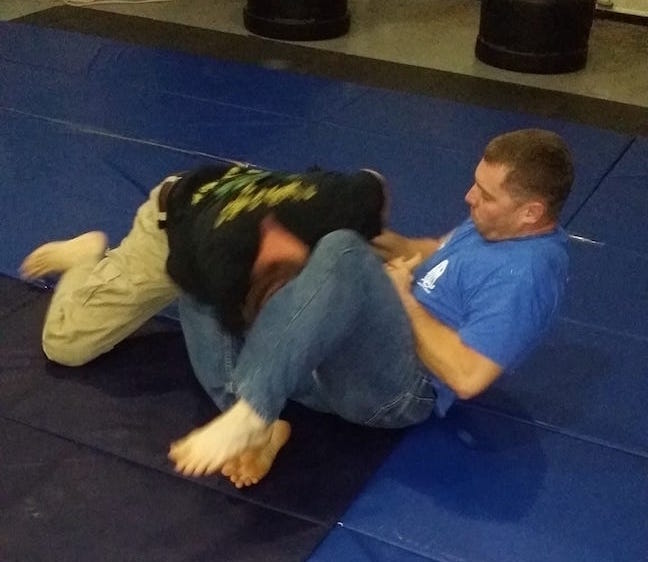 Fights are messy. Grappling with a knife in the mix is particularly messy. It happens, though, so be ready.

Guys: I care about you, and that’s why I teach you how to fight with firearms. But us armed citizens that consider ourselves “gun guys” (and gun gals!) just sometimes don’t understand the reality of hand-to-hand fighting. Your gun won’t solve every problem. Even if it will work in your current situation, just simply reaching straight for it without first dealing with the immediate threat might not be the best option.

If you’re serious about your own security, then you need a class like the Performance Edge Edged Weapons Workshop. You also need to learn other hand-to-hand skills, and if you’re in located in Central Kentucky, then I can think of no better place to go for learning combatives and MMA than Performance Edge.

And don’t think that Aaron only deals with knives and hand-to-hand issues in a vacuum; he’s a gun guy, too. He teaches two other seminars that are particularly suited to shooters: the Empty Hand vs. Weapons Workshop (he’s got one scheduled for this Saturday, 12/12/15) and Full Contact Gunfighting (next class is 9-10 January 2015).

I highly recommend you head over to PE and see what it’s all about. Oh, and if you decide to check it out, then let Aaron know I sent you! 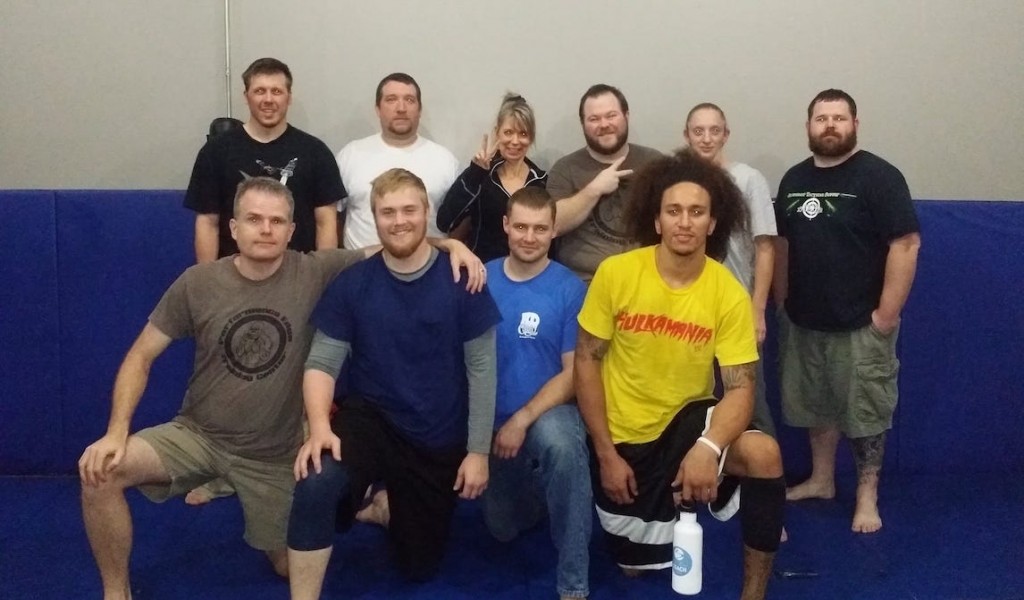 A good-looking class, especially that guy in the blue shirt kneeling in the front.