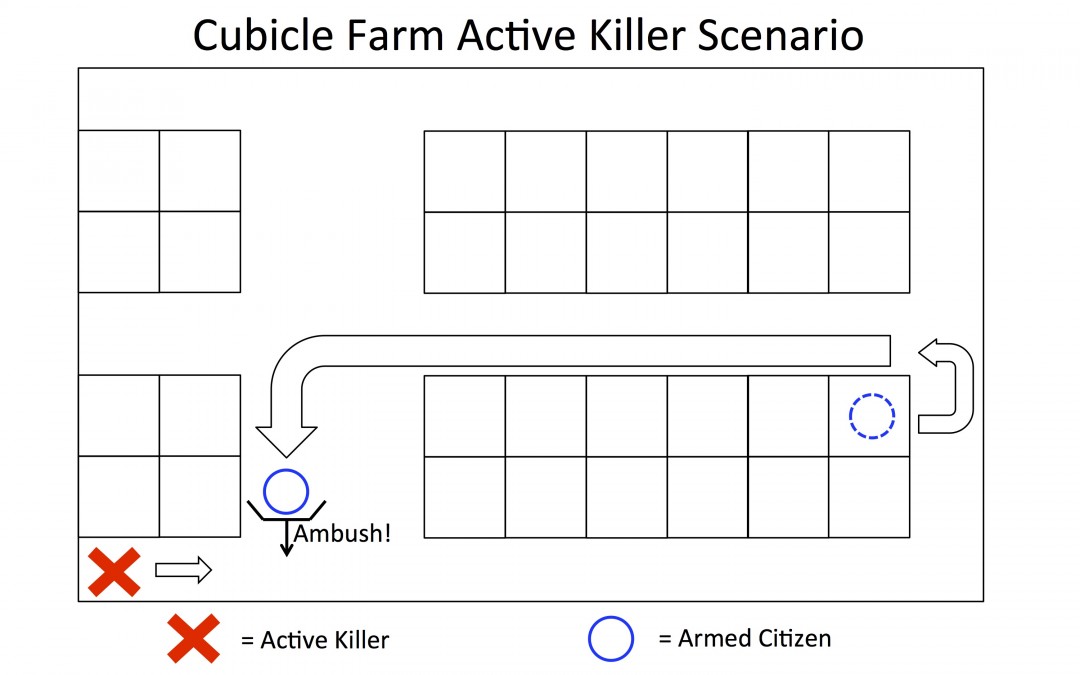 If you’ve been following this series, then you know the survival principles that I preach look like this:

We’ve covered the first two on that list; today we’re going to hit the next one.

In the military, we refer to TTP’s a lot. TTP stands for tactics, techniques, and procedures. If guns, ammo, and body armor are the hardware of fighting, then TTP’s are the software. As a general rule, software is going to trump hardware. Don’t get me wrong: you need tools to do work. But the fact is that if you don’t even know how to go about doing that work, then your tools are useless.

So what are the differences between tactics, techniques, and procedures? Let’s start by consulting Merriam-Webster for some definitions:

Tactics: The art or skill of employing available means to accomplish an end.

Technique: (A) A way of doing something by using special knowledge or skill; (B) the way that a person performs basic physical movements or skills.

Procedure: A series of actions that are done in a certain way or order; an established or accepted way of doing something.

Today we’re just focusing on tactics, but we need to draw a distinction between those tactics and the techniques and procedures that you will learn. So let’s break things down further and put them in a context that matters to you as an Armed Citizen:

Techniques and Procedures are all about the “little things” you do. In other words, techniques and procedures have to do with how to accomplish one specific thing. The method you use to reload your pistol when it runs empty is a procedure, and it looks like this:

Reloading is a procedure because it’s “a series of actions that are done in a certain way or order.” But within that procedure, you used certain specific techniques. For example, “indexing the magazine” is a technique for retrieving a new mag that ensures you’re able to “thread the needle” and get it into the magazine well under stress. Instead of hitting the slide lock with your thumb, your technique was to reach over the top and rack the slide because it’s a consistent motion used in a number of different reloads and malfunction clearance procedures. These things are techniques because they are “the way that [you] perform basic physical movements or skills.”

Tactics, on the other hand, are bigger than techniques or procedures. If techniques and procedures are the “little things” then tactics are all about the big picture.

The words “tactics” and “tactical” get thrown around a lot these days. You have tactical training, tactical rifles, tactical shooting games, tactical gear – believe it or not, I was listening to a podcast the other day and heard an advertisement for a “tactical scarf.” Are you serious? How can a freaking scarf be tactical? Seriously: it seems like you could take a dog turd, spray paint it black or coyote brown, stick some velcro on it and charge $200 for a piece of “tactical K-9 excrement.”

What most people call tactical is actually tacticool, which is really just a marketing gimmick that tries to make shooting and fighting look really sexy. Don’t get me wrong; this stuff is pretty sexy. But the problem is that being tacticool is based around a certain look, and all usefulness of the TTP’s being taught take a backseat to the cool-guy factor. 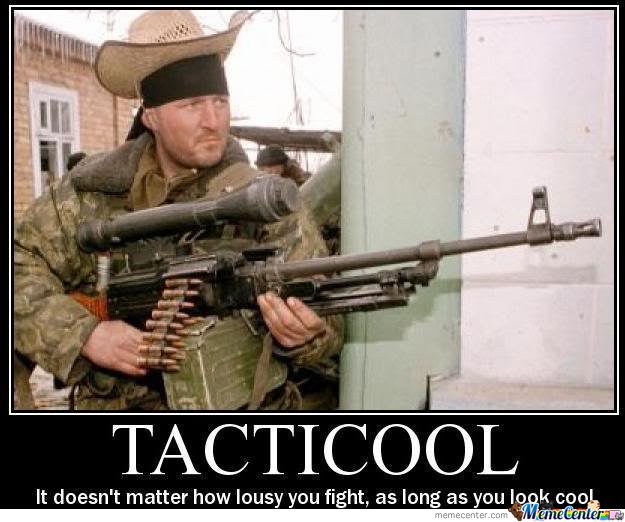 Well I want for us (you and me) to take the word tactical back. It’s time we put it back in its right place and start making legitimate gains in our training and fighting ability again. To do that, we’re going to start by understanding what is meant when we talk about tactics.

The definition above said the art or skill of employing available means to accomplish an end. It’s pretty important to note what that definition didn’t say. It didn’t say anything at all about guns or shooting.

That’s because you can use tactics in any situation. Trying to win a basketball game? Well you need to employ your available means (teammates, techniques, procedures) to accomplish your end (winning the game). Want to build a house? You will do so by employing your available means (tools, building materials, and workers) to accomplish that end (a finished house). Get the picture?

So in the context of fighting and self-defense, tactics are the ways we use the weapons, skills, and terrain we have to accomplish our goals.

Let me give you an example of what I mean.

Say some kind of terrorist runs into your workplace and starts shooting the place up. The first thing you do is dive for cover out of view of the active killer. You have your EDC (every day carry) on you, which includes a Glock 19. In this situation, you have the training and motivation to be considered a Level 2 or Level 3 Armed Citizen, so you decide that your endgame is to take down the active killer and stop the massacre.

Your tactics are going be the way you go about taking him down. So what might that look like? Well let’s say that you work in a cubicle farm (I hate that for you, by the way). You’re in one big room divided up into tiny little cubicles with temporary walls. The temp walls are about five feet high and don’t stop rounds. However, the little cubicle walls do provide concealment, which means that they keep you from being seen.

You know the layout of the office, and you know the location of the shooter. You decide that your chief tactic is going to be to set up an ambush, or surprise attack from a static position. You didn’t get a good look at the enemy, but you did see that he was using a long gun and was wearing some kind of vest. Maybe it was body armor, or maybe it was just a load-bearing vest for carrying spare mags. Either way, you can’t be sure he’s not wearing armor that will stop your puny pistol rounds. Between the enemy’s range advantage and the possibility that he could be wearing body armor, you decide that you need to be close to guarantee a fast headshot and negate the advantages of his superior weapon.

Heart pounding and ears ringing, you sprint out of your cubicle and buttonhook left to dash between rows of the tiny carpeted cells. Staying low beneath the top edge of the cubicle walls, you make another left turn and run forty feet to the end of your block of cubicles. You draw your Glock and sneak the last fifteen feet up to a corner that the killer is about to pass by. You see the muzzle of his rifle poke out from around the corner of the cubicle in front of you as your face and chest turn red-hot from adrenaline. Before he can turn the corner and see what’s going on, you extend your pistol out toward his head and start rapidly pulling the trigger. The muzzle being no more than eighteen inches from his head, 3 rounds find their way into the killer’s face. You watch as he crumples into a heap on the floor, his sick killing spree brought to a screeching halt.

See how tactics came into play in that scenario? You had certain means available for use (a Glock 19, a knowledge of the terrain, concealment from observation provided by the cubicle walls, a high level of skill in the techniques and procedures of shooting a pistol) and a particular end in mind (stop the killer). You used the means in column A to achieve your desired end from column B.

Tactics are more important than techniques and procedures. Even though you might screw the pooch on your techniques and procedures, you might find yourself in a position where it’s hard not to win if your tactics are on point. Think about the example above: even if our Armed Citizen wasn’t a very good shot (ie: bad at marksmanship techniques), then the fact that his tactics got him into a position where he had total surprise and his muzzle was only 18″ from the badguy’s face, he was going to be hard pressed to lose that fight.

However, just as Sir Mix-a-Lot would love to hear right now, there is a big but to all this. That big but is that you shouldn’t really focus on getting training in tactics before you have a good grounding in techniques and procedures. Why is that?

Think about your brain as though it were a computer. A computer only has so much RAM to accomplish different tasks, and once you use up all that RAM from multitasking, things bog down. Well you as a human being have a similar problem, but worse: human beings are terrible multitaskers.

Quickly and correctly solving tactical problems requires you to observe your surroundings, process what you’re seeing, make a decision about what to do, and then execute that decision. This takes a lot of your brain’s processing power. If you haven’t locked down your techniques and procedures when it comes to shooting and gunhandling, then your head is going to be in the gun when it should be in the tactical problem.

Your goal with training techniques and procedures is to become so good at them that you don’t actually have to think about how to do them. When it comes to drawing, shooting, reloading, or clearing malfunctions, your body should just run on autopilot. This has been called muscle memory by many.

If you’re not at that level (or well on your way to it), then you’ll be wasting your time in a tactics class because you won’t be able to isolate and work on your tactics. Instead you’ll be struggling through using your gun when you should be making tactical decisions.

Now get back to work.