Basic Training: Get Your Priorities Straight 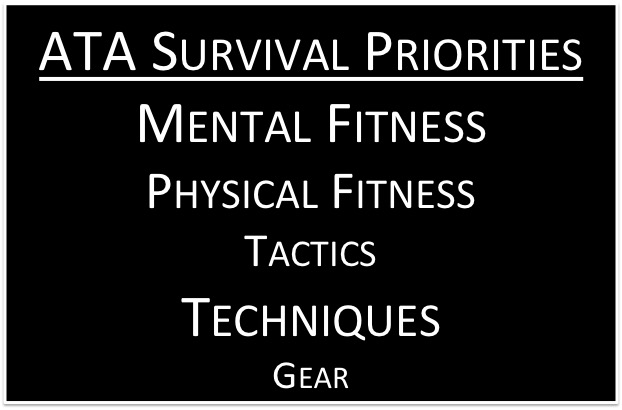 In our first Basic Training post, we discussed the need for setting goals. A journey has to start with the destination in mind, or else making continual, forward progress will be impossible. After deciding upon your destination, however, you need the actual roadmap – the turn-by-turn directions to get from where you are currently to where you want to be. That’s what we’re going to dive into today.

While on your journey to becoming an armed citizen, you’re going to have to prioritize your training efforts. None of us have unlimited time or funds, so we have to make decisions that get us the best bang for our buck. We have to determine the areas that need to be trained and hold off on the less important areas; we have to separate the wheat from the chaff. You might really want to take that cool CQB class from the former SEAL Team Delta Forces Ninja, but if you’re in poor physical condition and don’t yet have a concealed-carry permit, then maybe – just maybe – your efforts would be better spent elsewhere.

James Yeager of Tactical Response has developed his hierarchy of survival, which listed in order from most important to least includes mindset, tactics, skill, and gear. My personal list of Survival Priorities is similar, but a little different:

Basically, what you’re looking at is a list – in order from most important to least important – of the things that you need to survive an emergency. Let’s take a look at each one in more detail.

Mental Fitness, or Mindset, refers to having the mental state needed to win. When things get bad, you have to be able to think clearly and make good decisions. You have to be mentally tough and literally develop a killer instinct. If me describing the attitude needed to win a fight as a “killer instinct” seems distasteful or harsh, then that’s a sure sign you need to work on your Mental Fitness.

Having a weak mind can snatch defeat from the jaws of victory because the mind almost always gives out before the body. On the other hand, a strong will and a proper mindset will propel you through the worst situations so that you emerge victorious on the other side.

The bottom line is this: Mental Fitness is imperative for success. It is the most important, foundational building block for your survival. Without a proper mindset, everything else you might do will be in vain.

Physical Fitness (Or PT for us military types)

It’s one thing to know how to do something and another to actually be able to do it. Without the means to apply your knowledge, the information contained in your brain effectively becomes nothing more than trivia. It’s good for winning games and carrying conversations but worthless for survival. That is precisely why physical fitness is second in importance only to mental fitness when it comes to your success.

If you answered yes to any of the above questions, then you are not in fighting shape. You will likely just be a hindrance rather than a help during an emergency. Emergency situations – which include gunfights – place extreme demands on your body. If you’re serious about this whole armed citizen thing, then you need to get in shape. Otherwise, you’re just playing; for you, self defense is nothing more than a fun game.

Tactics are the methods we use to achieve victory. With tactics, we’re more concerned about when and where to shoot rather than the details of how to shoot. Tactics are essentially the decision-making part of fighting (or anything else, really).

Good tactics can make up for a lot of other shortfalls. Using a small unit engagement for an example, having good tactics means that you get your force into the best possible position to fire on the enemy force while remaining protected from return fire.

Phrases like “the only fair fight is the one you win,” “always cheat, always win,” or “I try to avoid fair fights” illustrate the spirit of what you’re trying to accomplish through your tactics.

When we talk about training, this is what most people think about. Technique refers to your hard skills with weapons, medical care, hand-to-hand fighting, etc. When you work to have a lighting fast draw, clean reloads, and a high degree of accuracy at speed, you are working on your techniques.

Make no mistake: techniques are very important. But notice that techniques are listed next to last in the Survival Priorities. While it is important to be as good as you can be in your techniques, you have to understand that you don’t have to be Wyatt Earp to effectively defend yourself – especially if you have the other survival priorities squared away.

This one is pretty self explanatory; we’re talking about the physical stuff you actually use in survival: the guns, medical gear, armor, bug-out-bags, etc.

The only thing I really need to say about this right now is that it is dead last on the survival priorities for a reason. Don’t get me wrong: it’s still important. I mean, after all, it did make the list. Like my dad says, “If a man is going to do some work, then he needs something to work with.” But the fact of the matter is that gear is where you should spend maybe 10% of your time, and the average American that views himself as an armed citizen usually spends 90% or more of his time buying gear, trading gear, researching gear, or just generally oogling over gear. That’s weak. Stop it. Just spend some money on good gear and then be done with it.

Just because the survival priorities are in a certain order of importance does not mean that they are best developed in that order. 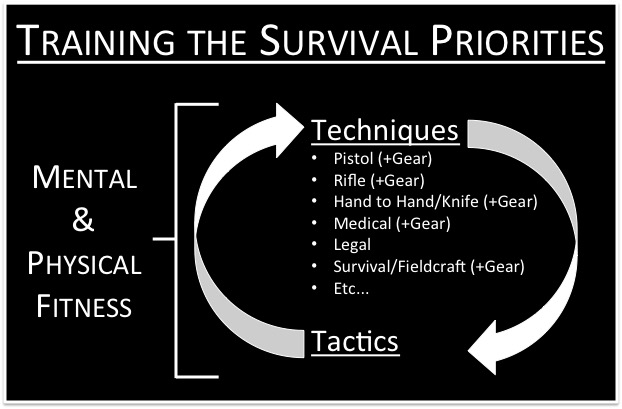 The survival priorities are best trained in a specific order.

Mental fitness has to be at the beginning and the end of your preparation, but it isn’t developed in a vacuum. Developing all your other survival priorities (especially physical fitness, hand-to-hand combat skills, and wilderness survival techniques) enhance your mental fitness. Being cold, hungry, hot, sweaty, in pain, and stressed out builds mental toughness that you just can’t get from reading books.

Physical fitness gets developed on its own, right from the beginning, and it has to continue throughout your training progression. When you stop working on your health and fitness, you start losing what you’ve gained to that point.

After you have gotten meaningful changes underway in your mental and physical fitness, you need to start training in basic skills: pistol, legal, medical, and hand-to-hand are the best starting places. Along with this is acquiring a concealed carry permit, if that applies to you where you live. Note that I did not say “after you are totally physically fit and mentally tough”. I said “after you have gotten meaningful changes underway.” Don’t ever sell yourself short and talk yourself out of some training because you don’t think you are smart enough, fit enough, good enough, etc.

You should acquire gear as you need it throughout this process, but don’t let it become your focus and don’t let it hold you back from getting something done. Don’t have enough cash to buy a gym membership or a bunch of Underarmor and Tapout gear? Then just run down the street and do push-ups and air squats in your home. Don’t have a pistol, but want to take a pistol class? Many instructors (including myself!) have guns you can rent. Even if they don’t, you could just bum the gear off a friend.

Once you have a solid foundation in skills & techniques, the next step is to get training in tactics. This could take the form of range-based tactical training (like our two-day SUT class, when it comes online), or it could be force-on-force scenario training like that offered by Tactical Response.

By the time you reach that level, you will be better off than 98% of other armed citizens that fall in the Level 1: Self-Defender category. If you want to progress on to higher levels of proficiency, then you are now in a position where you can lather, rinse, and repeat. Your tactical training or force-on-force scenarios will highlight weaknesses in your techniques, so you go back to the square range to square away those newly-exposed skill deficiencies, and then after working on your skills some more, you go back to the schoolhouse for more tactics training. All the while you’re continuing to develop your mental and physical fitness as well as acquiring gear, when appropriate.

That’s All She Wrote

This was just intended to be a broad brush painting of what the survival priorities and a general training progression look like. There is a lot more detail to fill in, and that’s what future posts in this series will cover. Next time, we’re really going to dive into the most important survival priority: Mental Fitness. What is it, and how do you develop it?