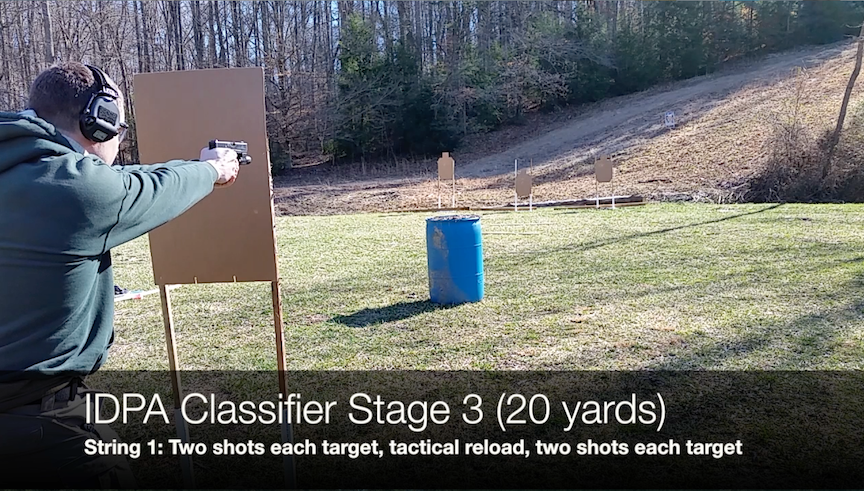 I’ve taken way too long to do it, but I’m finally getting around to writing the first blog post in the Armed Citizen Pistol Qualifications series. This article is going to lay the groundwork for several more that will follow. Today we’re just going to talk about Pistol Quals for the Armed Citizen in general. We’ll go into the specific courses of fire in future posts.

What are “Pistol Quals”?

Before we go too far, let’s talk generally about pistol “quals” or qualification courses. First of all, let me explain what I mean by that term. A Qualification Course of Fire (or “qual” for short) is a course of fire with a set standard that is periodically required of individuals who carry guns for a living. Police, soldiers, Marines, certain security personnel, etc. all fire periodic quals to demonstrate that they are competent to carry a handgun.

As far as I know, no such standard exists in the civilian world. Sure, you might have to pass a very easy qual to initially obtain your CCDW permit, but there isn’t really any requirement to demonstrate any kind of a sustained proficiency. On top of that, the standards are usually abysmally low.

Now don’t misinterpret what I’m saying: I don’t think you should be required by law to fire any kind of a periodic course of fire to carry a gun or otherwise exercise your rights. Nor do I support mandatory initial training and/or qualification before being “allowed” to carry a gun. But like I say pretty frequently: just because you can doesn’t mean you should. Or in this case, it might be more accurate to adjust that statement: just because you don’t have to doesn’t mean you shouldn’t.

Let me go ahead and give you a few big reasons why I think you should be regularly testing your skills:

1. It’s a form of practice: While I don’t think that every Armed Citizen has to make their entire life all about shooting or train every single day, I do think that it’s your responsibility to maintain some basic level of skills if you’re going to carry a deadly weapon. Even if you only shoot once month or one a quarter, that’s a lot better than just getting your permit and then never shooting again.

Whether you train frequently or rarely, you need to go into your practice session with a plan to get the most out of it. None of us have unlimited time or ammo, so you need to get the best bang for your buck. If you don’t train really often, then a qualification course can be viewed as a ready-made practice session. You don’t have to come up with what to do; you just pick a good qual course that has you working relevant skills and then work your way through it. Just remember: until you get to the point that you are achieving a perfect score on your chosen course of fire, there is still value to be extracted from that course. That leads me to my next point…

2. Qualification courses enable you to track your progress: The idea behind training and practice is that you get better, not worse. Wouldn’t it be great to know if your skills are, in fact, improving? When you shoot a qualification course, you have a built-in tracking method at your disposal. Qual courses require you to achieve certain scores in certain time limits. When you put numerical metrics on things, they become easy to write down and track. If your numbers are getting better over time, then you know that you’re becoming a better shooter.

Additionally, tracking your scores enables you to analyze your strengths and weaknesses. Most people like to hit the range and work on the things they are good at, but don’t fall into that trap! By analyzing your performance on a qual, you can determine what your weak areas are and then spend a little extra time on them when you practice. Let me give you an example.

Say you decide that you’re going to dedicate 100 rounds of ammo per month to a live fire practice session. If that is your situation, then your best option may be to select a qual course that requires about 40-60 of those rounds. Then after you shoot your qual course, you can dedicate your remaining 40-60 rounds working on the things you did poorly at while shooting the course of fire. Make sense?

3. By meeting a known standard, your legal defense may be improved: Disclaimer: I’m not a lawyer, you’re not my client, and this is not legal advice. As an Armed Citizen, you must understand that there are multiple fights to win whenever you’re required to pull your gun in self defense: the gunfight, the legal fight, and the mental/emotional fight. I know that a lot of Armed Citizens are pretty quick to brush off the legal fight by saying things like “I’d rather be judged by 12 than carried by 6.” The problem with that line of thinking is that it ignores the very real possibility that you could win the gunfight only to spend the rest of your life in jail. That’s not what I consider a real win.

One tactic that a prosecuting attorney may use to get a conviction is to paint you, the Armed Citizen, as a gun-toting nutjob vigilante. One way that has been suggested to counter that sort of attack is to shoot (and pass) a recognized qualification course, particularly one fired by a law enforcement agency. You could shoot the qual course of your local city PD, your sheriff’s department, or even your state police agency. Better yet, I recommend shooting the FBI Pistol Qual. In the eyes of most juries, who is more credible than the FBI? The fact is that if you shoot an LE pistol qual, pass it, and then have a witness record the results, that doesn’t exactly make you look like some kind of crazy vigilante now, does it?

4. Good qual courses are fun: Look, not everything in life can be about smoking badguys. We need to relax and enjoy ourselves. Shooting guns should be fun. Heck, there are a lot of people out there who pretty much only own or shoot guns as a hobby. I’m not one of them, but you better believe that I have fun with this stuff.

Well-designed qualification courses present a challenge. Challenges are fun. Don’t believe me? Put a reduced-size silhouette target at the 100 yard line and try to hit it with your rifle in less than 2 seconds, going from standing to kneeling. It will be more addictive that the most intense game of Pac-Man you’ve ever played – much more fun (and beneficial) than shooting at pop cans or water-filled jugs for an hour.

Having fun and being challenged keep you engaged. The more engaged you are, the more likely you are to actually get outside to shoot, and then become a better shooter. Also, the more fun you have, the more you can just enjoy the awesome life that you’ve been blessed with. I’m all about that.

So that’s why I think you should be shooting some kind of pistol qual: it helps you organize your practice, enables you to track your progress, improves your legal defense, and it’s just fun. In our next installment on pistol qualification courses, I’m going to go in reverse order of the YT videos and tell you about the FBI’s new pistol qual, my preferred starting point for the Armed Citizen.

But here’s the thing: A lot of the skills that you’re required to shoot during the courses of fire I’m going to describe are foreign to most gun owners. To be able to execute them safely and get something out the practice, you really need to get some training. If you want to make the transition from gun owner to Armed Citizen, and learn the skills you need to know to shoot and pass some of these courses of fire, then I would encourage you to come train with us here at ATA. Follow the links below for more information.